THIS PAGE IS UNDER CONSTRUCTION AND WILL BE UPDATED SOON! 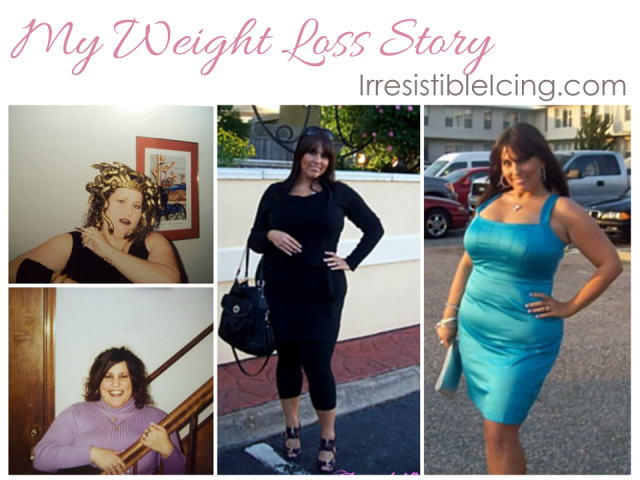 I don’t have one of those magical before and after weight loss stories about how I was once fat and now I’m thin and haven’t looked back since. I’m not the person who gained a little weight after having a baby or gained 30 lbs in college. NO. I’ve seen my life through fat glasses and it’s all I know.

Instead this is my story about battling binge eating disorder. It’s about a vicious cycle of gaining weight, losing weight, gaining it back, and battling depression in between. It’s about how weight has controlled every thought in my mind and every decision I’ve ever made. It’s about how I can remember everything in my life based on how much I weighed at the time and what size I wore.

This is not a simple before and after weight loss story. I’m sorry but it just hasn’t been that simple for me.

My story isn’t short and sweet. There are many stories within MY story. I swear I could write a book because there’s just so much more behind being overweight than just eating too many cupcakes. It goes much deeper than that. I realize it now. I never knew that before.

I could ramble on and on about this but I’m a visual person. The best way to start to share my story is by giving you a look into my life with pictures. After all, pictures really do speak 1000 words.

I have my first memories of feeling like the “fat kid” as far back as first grade. I knew I was different from the other kids. By the time I was in 4th or 5th grade, the bullying began. I was called every name in the book. It was hurtful and something I’ve carried with me my whole life.

My first clear memory of “dieting” was the summer before 8th grade. I did the Richard Simmons Deal-a-Meal and I lost about 20 lbs. I still remember this bully on my bus telling me on the first, the first effing day of school, “I can tell you lost some weight but it’s still not enough.” WTF?! Why was it ever any of his concern? 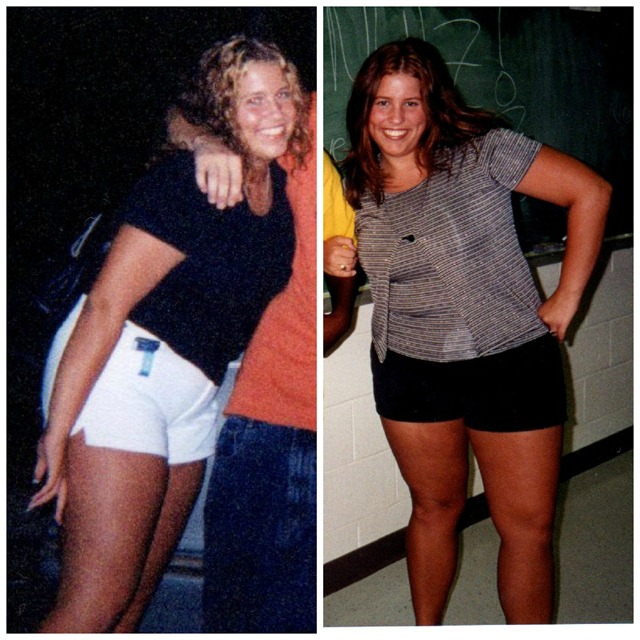 I remember cutting that picture on the right so nobody would see my legs. I thought they were huge and disgusting. Now, I see legs that are strong, beautiful, and free of cellulite. I embrace my thick thighs now. If I only knew that back then . . . .{PS – OMG, I’m wearing a pager lol}

OMG I thought I was an obese hippo. No, really I did. It didn’t help that the majority of my friends were a size 2 and hadn’t even developed curves yet. It made me feel HUGE next to them. I also went to a predominately white school where curves, big hips and thighs were not embraced. It was the exact opposite. People actually judged you for not having a gap between your thighs. <sigh> I never felt good enough because I was curvy, had curly brown hair that wasn’t bone straight, and I looked different than all the other girls.

I packed on close to 100 lbs in a very short period after I graduated high school until I reached my highest weight of 250lbs! I severely damaged my perfect skin from gaining so much weight at one time and I still have the stretch marks to remind me. 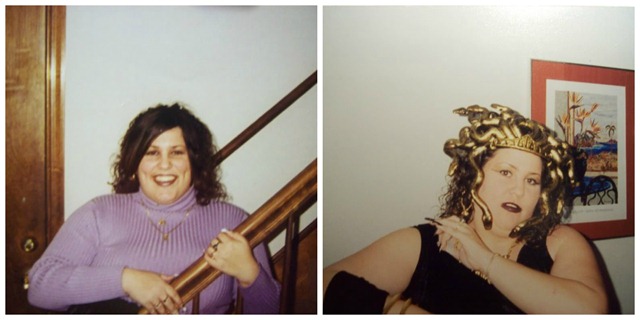 I was in complete denial that I’d gained so much weight . . . even though my jeans no longer fit and had been replaced by stretchy pants. It wasn’t until I went almost a year without a period that I went the doctor and they told me it was because of my weight!

The doctor set me up with a nutritionist that showed me how to start making better choices. I went to school and work full-time, so I LIVED on fast food. I stopped seeing this nutritionist when it was made clear that she had a hatred of fat people. She actually had the balls to tell me that the only reason she got into the nutrition field is because all the women in her family are obese and she didn’t want to be like them!

That’s when I started looking elsewhere and joined Weight Watchers in 2002. This I could do. This felt normal and like I could still live.

BUT just like every other time, I was never consistent. I’d lose about 20-30 lbs and then the weight would slowly creep back on. For the next 7 years I continued to live in this yo-yo dieting world where I would binge my week away until I could start over on Monday morning.

My Engagement and Wedding

In 2009, I finally decided that I had enough. I really started to put the work in. Once I got engaged in August 2009, I hustled to lose more weight for my big wedding day. 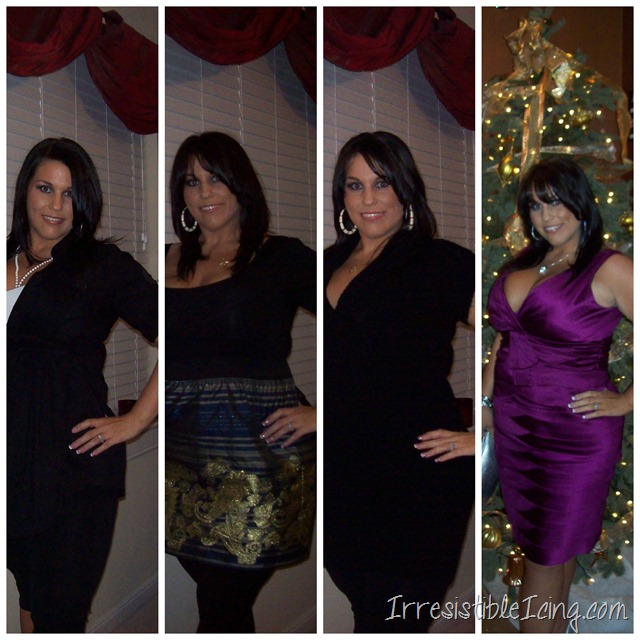 These were taken in November and December 2009. I had a last minute holiday party and had always dreamed of fitting into a fitted satin dress. You can’t fake it in those dresses and they don’t stretch! I literally cried in the Macy’s dressing room when that purple dress went on just like a glove. That was a huge moment for me that I won’t forget. I knew I was on my way to my goal. 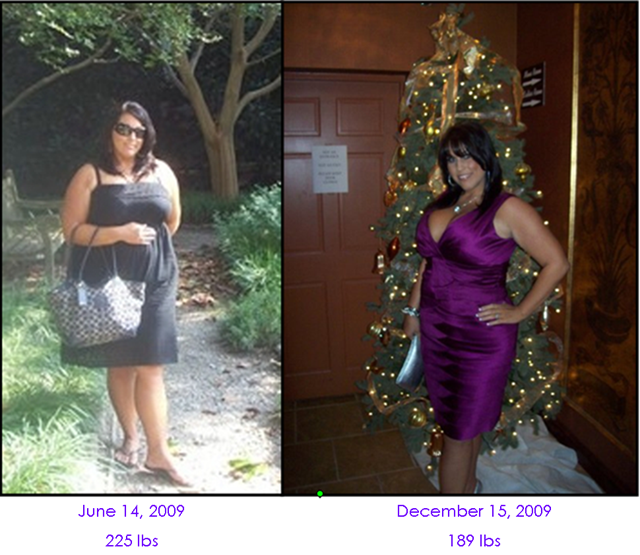 By 2010, I was the smallest that I had been since high school but I felt way better than I ever did in high school. I was a woman now and I owned by curves. I was no longer ashamed of them. I felt amazing. This was the happiest year of my life, it’s the year I got married, and I loved every minute of it. 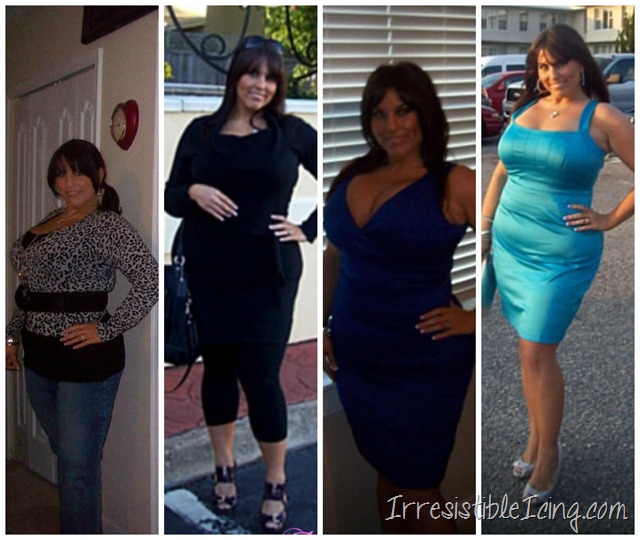 I wasn’t at my goal weight by the time of my wedding and for a long time I beat myself up over that. BUT, I looked ten times better than I had in years! My wedding was magical. That period of my life was even more magical. I felt so happy. I felt beautiful and yea, I looked it too 🙂 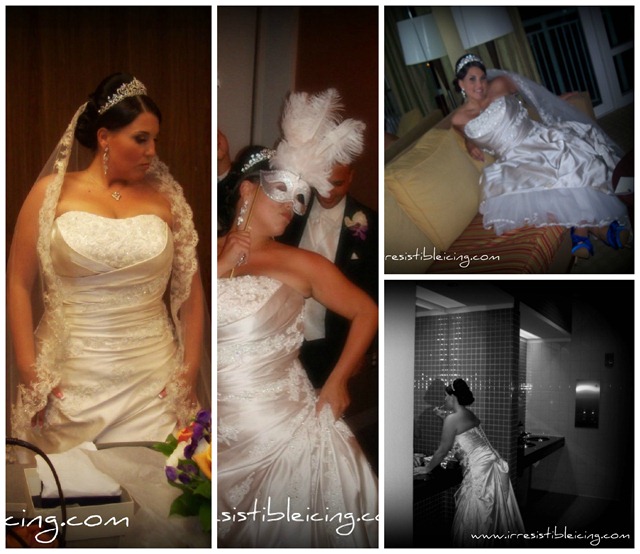 Just days after my wedding, I was floored with news that I couldn’t handle and it felt like my world came crashing down around me. This set me into a deep depression that worsened over the next year. All I did was eat. Eating crap that I didn’t even like. Running out for fast food multiple times a day. Again, in total denial that I was gaining back the weight even though my pretty satin dresses would barely fit over my hips and my “skinny” jeans were lonely hanging out in my closet by themselves. I started to isolate myself because I was humiliated that I gained back all the weight I lost. I couldn’t handle people seeing me fat again. I lost friendships because they just didn’t understand what I was going through. The weight gain, the bad news, and the isolation created an extremely depressive person that I didn’t even know.

I hit rock bottom in 2011 and decided it’s not another diet that I need. I need to fix myself from the inside. There’s some real patterns going on and I don’t know why I’m triggered in such a way. It hit me like a truck that I could replay my ENTIRE LIFE in terms of how much I weighed at the time and how it made me feel. I wasn’t happy unless I was losing weight. I was tired of starting over on Monday morning.

It was actually tough even finding pics of myself from 2011. That in itself makes me sad. I LOVE to take pics! My albums from 2011 are really empty which is a direct reflection of my depression and my weight. I feel like I lost a year of my life. Never again! 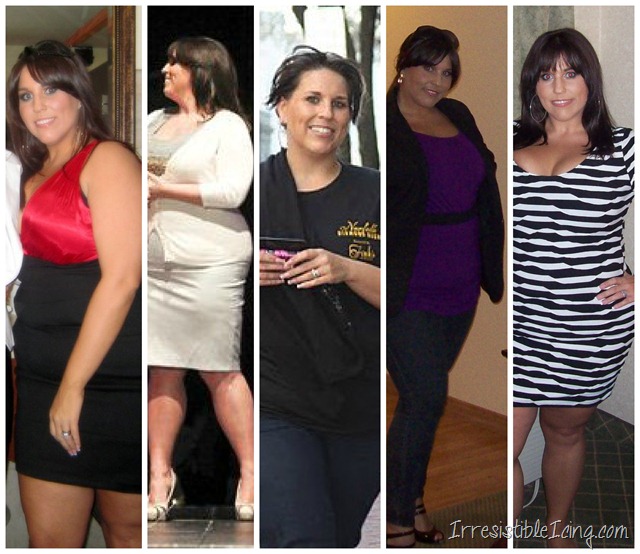 I began therapy for my emotional eating disorder in the fall of 2011. It is not an overnight cure. We are dealing with deep rooted issues that I didn’t even know I was hanging on to. Your subconscious is a bitch!

I’m trying to take 30 years of bad habits and make a REAL lifestyle change, not just drop 20 lbs for the next vacation. I started to forget about dieting, measuring food, journaling, etc. I started eating healthier things and only when I was actually hungry. I’ve noticed that the weight is coming off the more I work on my emotional health. Who knew?!

This is my weight loss progression (Again) in 2012. 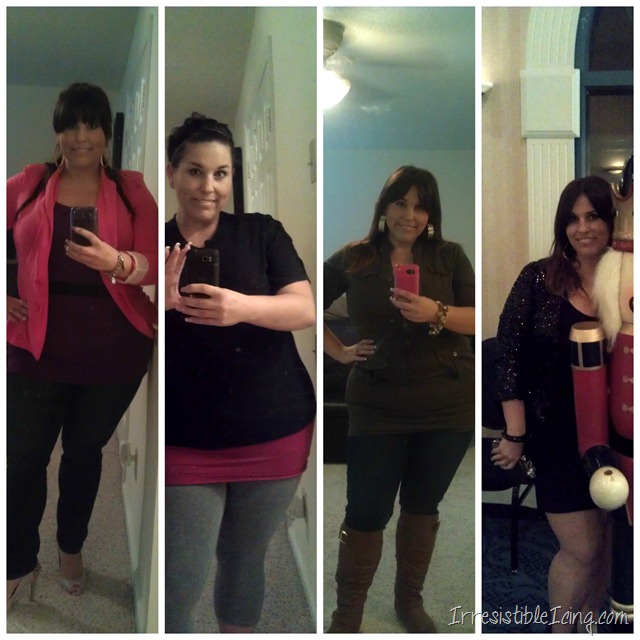 It’s 2013 and I’ve lost almost all the weight I gained back after my wedding. I feel great emotionally and physically. There’s days that are really tough because I’m allowing myself to FEEL emotions rather than push them down with food. Who knew I was even doing that?! It’s a really uncomfortable feeling at times. 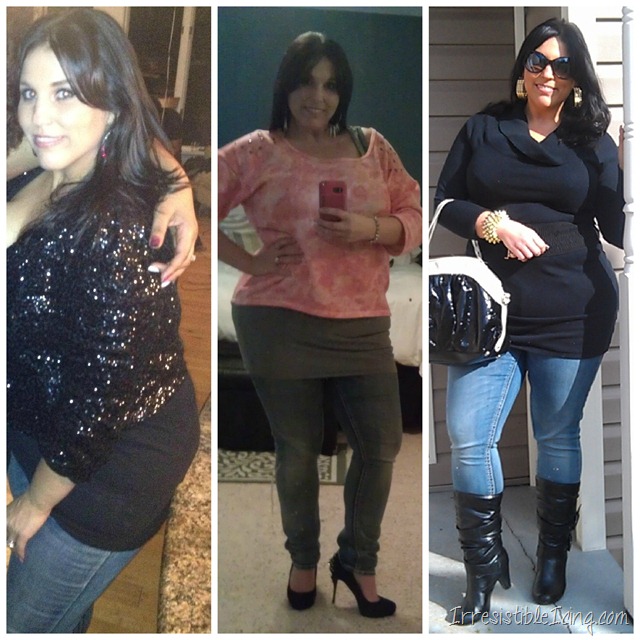 This is me in 2013 in January, February, and most recently in March on the right.

Most recently, I dealt with a series of gallbladder attacks that ultimately led to me having my gallbladder removed in March, 2013. These health issues set me back with my weight loss and workouts. You can read all the posts about that here. 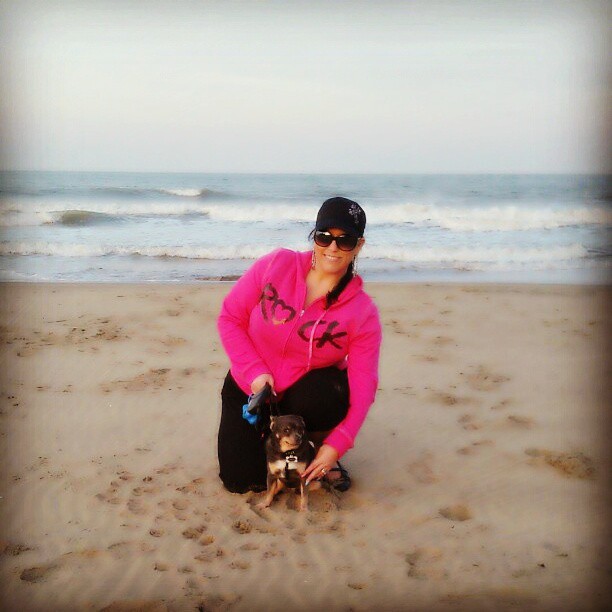 This is me, April 2013 a week after gallbladder surgery.

There’s still days where I need icing like a crack head needs a fix. Sometimes I give in…other times I don’t. Some days I still hate my body…other days I feel encouraged about my potential. Some days I want to say the hell with this and other days I want to keep going. The point is that there’s no longer a before and after for me. There’s only today. My before and after is ALL of me. It’s a reminder of where I’ve been and what I’ve overcome. I will always have to fight this battle…I just hope that it get a little easier along the way. I will always be a work-in-progress!

This blog is a way for me to document my journey . . . my journey to becoming irresistible.

11 Comments on My Story 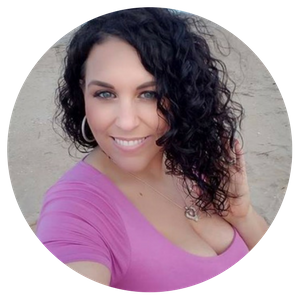 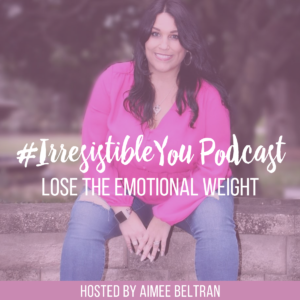 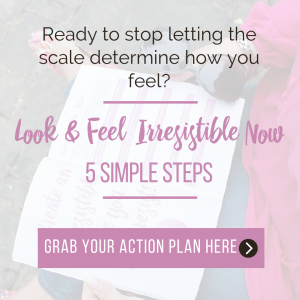 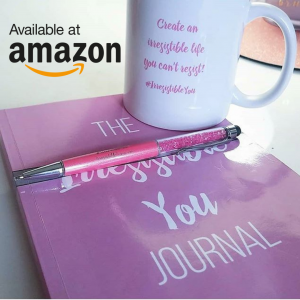